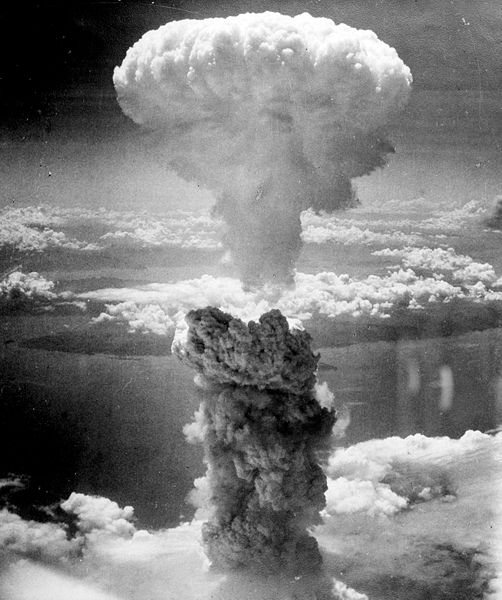 This classic is undeniably one of the world’s most famous photographs. It depicts the nuclear explosion over Nagasaki, known as the Fat Man mushroom cloud,
on August 9th, 1945. The US bombing of Japan, in the final stages of World War II, obliterated three city miles and killed 70,000 people immediately and many more through radiation exposure in the years to come.
At the time, news of the atomic bombing was heartily greeted in America and highly publicized with this image (and the censorship of photographs showing death and human sacrifice). Years later, however, documentaries and photographs were unearthed and the world was made aware of the human tragedy. From then on this photograph has come to represent the true nature of war and the extreme potential of human invention.


Dr Fritz Klein stands in a mass grave in Belsen 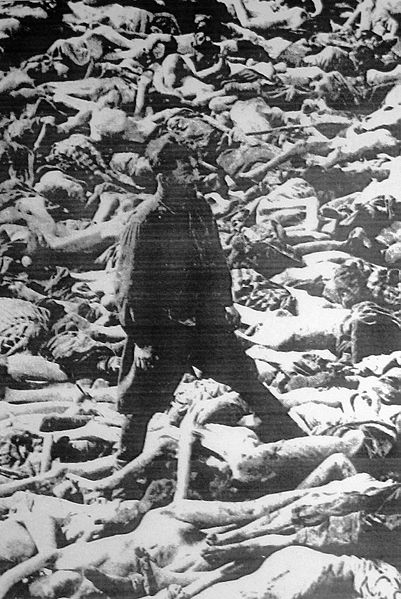 In this famous photograph, Dr Fritz Klein, the camp physician, is standing in a mass grave at Bergen-Belsen concentration camp; his main duty was the selection of prisoners to be sent into the gas chambers. From 1942-1944 transport trains delivered Jews, Romani, people with disabilities, Soviet war prisoners, homosexuals, Jehovah's Witnesses and other political and religious opponents to “forced labor camps”. Here, after a selection process, prisoners were made to work 12-15 hour shifts, wearing only striped fatigues and wooden shoes. The weaker, older and more defiant were sent directly to the gas chambers (where everyone eventually landed up), to be gassed alive, with their bodies disposed of either in mass graves or incinerated atop pyres.
It is disputable how much of this the world actually knew – photographs circulated and rumors traveled – but it took over three years before action was taken and in the mean time two thirds of Europe's Jewish population had been exterminated. 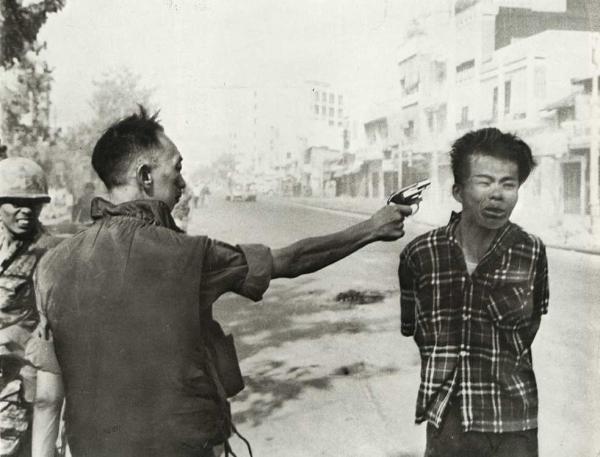 This Pulitzer Prize winning photograph by Eddie Adams is among the most famous war photographs of all time. The man with the gun is General Nguyen Ngoc Loan, the Republic of Vietnam’s Chief of National Police, while the man about to die is Nguyen Van Lém, a Vietcong soldier. Story has it that the prisoner was found near a ditch filled with the bodies of 34 police officers and their relatives, including those of the General…
The uproar created by this photograph opened an entire chapter in the world of photojournalism: “a picture is worth one thousand words.” The image soon became an anti-war icon, but Adams replied: “I killed the general with my camera… What the photograph didn't say was, 'What would you do if you were the general at that time and place on that hot day, and you caught the so-called bad guy after he blew away one, two or three American soldiers?”


The Most Reproduced Image of All Time, 1945 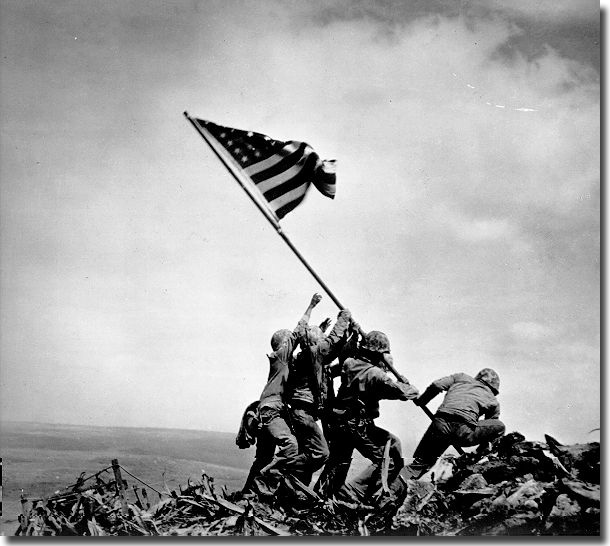 The raising of the flag at Iwo Jima is perhaps the most famous war photograph ever. The flag was raised by five US marines and one navy corpsman atop Mount Suribachi in 1945. Few are aware that this was the second flag; the first was too small and couldn’t be seen by the Marines on the island, and photographer Joe Rosenthal, who received a Pulitzer Prize for the image, only arrived in time for the second shot.
Iwo Jima was the first piece of Japanese national soil to be captured by the Americans – hence the area was heavily fortified and required four days of bloody battle before its mountaintop, Suribachi, was captured. The battle persisted for a whole month, in which three of the flag raisers were killed. In 1951 the picture was used by Felix de Weldon to sculpt the USMC War memorial just outside Washington, D.C.

1960s photojournalists showed the world some of the most dramatic moments of the Vietnam War through their camera lenses. LIFE magazine's Larry Burrows photographed wounded Marine Gunnery Sgt. Jeremiah Purdie, center, reaching toward a stricken soldier after a firefight south of the Demilitarized Zone in Vietnam in 1966. Commonly known as Reaching Out, Burrows shows us tenderness and terror all in one frame. According to LIFE, the magazine did not publish the picture until five years later to commemorate Burrows, who was killed with AP photographer Henri Huet and three other photographers in Laos.

The Trouble With the Troubles 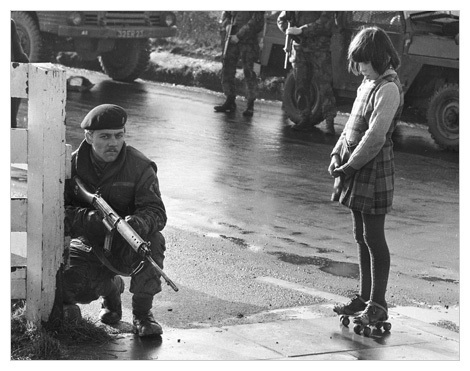 Northern Ireland was a very tense place for a very long time. And at the epicenter of the tension was a city called Derry, where "The Troubles" all began.
By 1969, everybody was an unclaimed fart away from a citywide fistfight. And then a group of Protestants had a parade that had the gall to come close to a bunch of Catholics -- so you know that shit was on. The ensuing riots, skirmishes and conflicts were so prolonged and so commonplace that the townspeople simply learned to go about their business as the boys played war in their front yards. That led to photos like the above, where Seamus Hardass' new Facebook pic is being photobombed by a girl on roller skates